China on my mind


Recently my wife and I visited China and Thailand during November and December of 2007. It was an eye opening experience for me. Thailand was nice, the usual tourist spots, warm weather,Â sunny beaches, and yummy delicious Thai food. China, on the other hand, was a sight to see!Â Its not like any other place I have visited before, the culture, the people, the food, the historic places…Â  OK,Â you probably don’t want to hear me ramble about my 5 week vacation right? There is something else we need to talk about - related to finance of course - the emerging China markets - or has it already emerged and positioned itself as one of the biggest, dominant, and powerful markets now? People, we need to look at China and if you are wondering how to profit in the Chinese markets, you better start your research now! 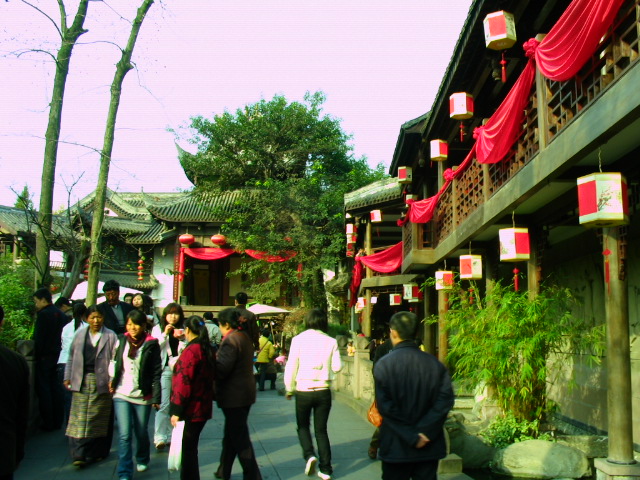 As we travelled through 12 cities in China,Â there was one common sight we could always expect in every major city. Centralized areas of intense shopping and dining, throbbing with commercial activity. Large malls, with namebrand shops like the Gap, Limited, Versace, Nike, Addidas, and more, are popping everywhere. Shopping isn’t just limited to the weekends in China. All day and all night, there is a constant buzz of people walking, shopping, eating, selling, buying…doing what they need to do to keep the economy alive!

Just about everywhere we went, the large billboards and electronic advertising showed western models showcasing clothes, jewelry, watches, shoes, bags, just about anything. It made me wonder why there wasn’t many Chinese models on these billboards.Â The western markets have influenced the Chinese markets and the large namebrands are recognized everywhere.

KFC, MacDonalds, and Pizza Hut are practically on every street corner. The Chinese love for American fast food is taking over their country. Starbucks (yes,Â we stopped in for a cafe latte with one pump carmel for my wife to stay warm)Â is also popping up everywhere and the average coffee drink appears to beÂ transitioning from a luxury item,Â that previously was only available to the wealthy andÂ upper middle class, to an average cup of coffee, available to the common working class. If you are a stock owner of any of these large USÂ corporations doing business in China, I imagine you are probably going to hold onto these stocks, as these companies are rapidly growing their base and markets in China. Especially with the weakening US dollar, the income from these international markets are going to be a significant portion of the company’s reported income in the year end statements, once the foreign currency is converted back to the US dollar for reporting to the US investors.

We also had the opportunity to take a 4 day cruise down the Yangze river and tour theÂ largest damÂ in the world,Â the Three Gorge Dam.Â  This project was undertaken by the Chinese government to provide power to almost three-quarters of China. It is estimated to be 20 times more powerful than the Hoover Dam!Â  Of course the project comes with its controversies as well, especially environmental and social challenges that many Chinese citizens will face for manyÂ years to come. There are also majorÂ railway,Â air transport, subways and mass transit infrastructure projects going on all over China. Most of the world’s resources and materials, like steel and concrete, are being used up by China right now!

Major residential and commercial real estate developmentsÂ are cropping upÂ everwhere. As the Chinese peopleÂ get more wealth and enjoy a higher standard of living, housing marketsÂ and the real estate industry has boomed.Â Despite government policies to cool down a real estate boom, the countryâs major cities, like Shenzhen, Dalian, Tianjin, Hangzhou, Chengdu and Xiamen have experienced continued growth through 2007. We visitedÂ Xiamen, in the south of China,Â towards the end of our trip. Along the waterfront in Xiamen, a large mixed-use real estate development is taking place. This facility will showcase a residential and commercial neighborhood that includes offices, hotels, shopping malls, a marina, golf courses, cruise ship terminals, and outdoor parks.Â Remax, Prudential, Century 21 and other US real estate brokers have already set up offices and agents to cash in on the boom!

Entrepreneurs from street vendors, retailers, internet start ups, to large ventureÂ capital funded corporations and companies areÂ shaping the Chinese economicÂ markets. A successful businessÂ needsÂ customers, and China has billions of customers!Â They have the resources (people) and the buying power!Â

Just yesterday while driving to Riverside for work, I was listening to ‘These Days’ on PBS radio.Â Guest Reporter,Â Kai RyssdalÂ from MarketplaceÂ - National PublicÂ Radio, was answering questions from callers. The topic of China came up to which Kai was sharing his experiences when he lived in China and reported on China. I will leave you with some of his comments on China.

“…there is this amazing economic thing happening in China…”Â

“…sometime before 2030, China will be the biggest economy in the world. People need to ask themselves how they feel in this country about not being the worlds dominant economic power…”

Â Got your attention?

This entry was posted on Thursday, February 14th, 2008 at 10:01 pm and is filed under Bonds, Environment, Financial Markets, Investing, Real Estate, World. You can follow any responses to this entry through the RSS 2.0 feed. You can leave a response, or trackback from your own site.

« For the love of money… or is just for love! Happy Valentines Day Everyone…
Warren Buffet to the Rescue »
Podcast Powered by podPress (v8.8)
* end of infolink script </html